Wondering about bringing in a snack service for your business, but aren’t sure what your options are? Our job is to lay out all the vending service options for your Providence, Warwick, and Fall River break rooms. We would love to help guide you to a snacking solution that works best for all employees in the office or warehouse.

Sometimes the most classic, well-known option is the one to go for: vending machines. With the ability to fill them with the snacks and beverages of your choice, vending machines provide a great option for offices that want to make on-premises snacks available to employees.  Choose from Coke, Pepsi, or other healthy beverages to make everyone in the office happy.  Don’t have cash? No problem. Our vending machines are fitted with credit card readers and are able to take Apple Pay and other EPay options. Our machines use the latest technology like infrared sensors and wireless monitoring to ensure your snack makes it in your hands every time.  Vending machines are a great vending service option for your Providence, Warwick, or Fall River warehouse to keep workers satisfied and smiling. 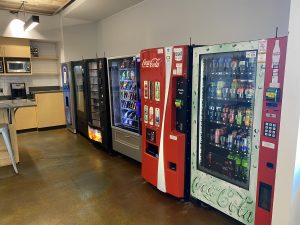 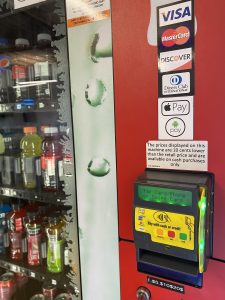 A micro-market is like having a mini store in your breakroom with a self-checkout. Micro-markets break out of the refreshment box with coolers and accessible shelves full of products available to the office 24/7. Each micro-market has a custom layout.  So, they can be installed into different rooms and spaces making them a flexible breakroom snacking option. Micro-markets use self-checkout kiosks that allow employees to pay for their snacks through a simple, streamlined process. Whether you want to let your employees pay for their own snacks in cash or provide an allowance to each employee through individual employee access codes, micro-markets allow you the option to do either. Interested in learning more about micro-markets? Reach out to us at 508-697-0800 or Contact | Take 5 Vending today. 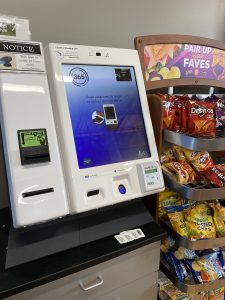 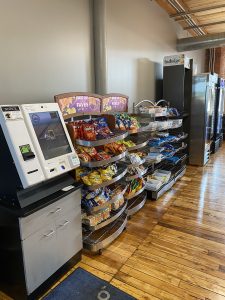 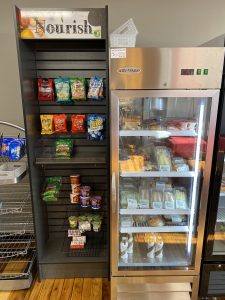 A lot of businesses want to provide snacks to employees as a way of showing appreciation and keeping a high retention rate. A pantry service is the perfect way to do so. With a pantry service we stock your breakroom, kitchen, or cafeteria with the snacks and/or drinks of your choice so your employees can access them as they please. We can work with you to create a delivery schedule, so your shelves never go empty. If you’d like to provide your workers with a breakroom snack service that’s paid for by the business, a pantry service might be a great option for you. 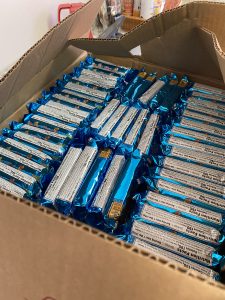 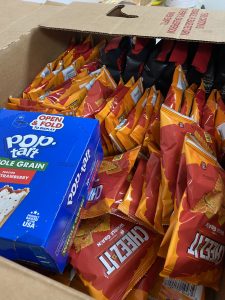 From gourmet coffee to high quality teas, we have the office coffee service options to impress and inspire staff. We provide a huge variety so you can choose from national brand coffee in different roasts to teas crafted from high quality leaves and herbs.

The benefits of our office coffee service go far beyond a free cup of coffee or bag of tea. It inspires and energizes employees, cultivating creative solutions and inspiring collaborative environments. It eliminates the need for employees to leave the office for the hot drinks they desire, saving time and energy. There are dozens of choices from traditional pot brewers that serve a high volume of coffee drinks to single cup systems that office superior variety. Thinking about bringing a coffee service for the warehouse or office? We’d love to go over options that would work well for your business. Just contact us at 508-697-0800 anytime 7am-3pm, Monday – Friday OR shoot us a message on our Facebook page Take Five Vending | Facebook.

It’s one of the oldest debates in soft drink history around – the cola wars. The cola wars refer to the long-time rivalry between soft drink producers, The Coca Cola Company and PepsiCo. Whether you’re a casual sipper or a soda fiend, chances are you have a strong opinion when it comes to the Coke and Pepsi battle. The good news is whether you’re a Coke or Pepsi fan, we carry both in our vending machines so there’s no need to fret. What really separates Coke from Pepsi? And when did the so-called Cola Wars start? Read on below to find out. 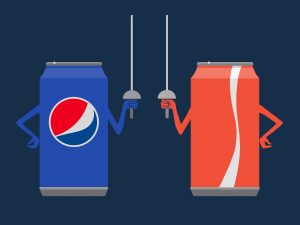 If you ask most soda drinkers the biggest difference between Coke and Pepsi, nine times out of ten the answer will be that Pepsi is sweeter. It’s not surprising Pepsi is sweeter considering it has 2 more grams of sugar per can than coke. While many people describe coke as having a vanilla flavor, Pepsi has more of a citrus tanginess to it. This citrus taste results from citric acid being one of its ingredients.

The Start of the Coke vs Pepsi Debate

In the early 1980s, the “Pepsi Challenge” emerged as a marketing promotion from PepsiCo. The challenge originally took form in a single blind taste-test.  At malls, grocery stores, and other public locations, a Pepsi representative would set up a table with two unlabeled white cups: one containing Pepsi and one with Coca-Cola. People were encouraged to taste both colas, and then select which drink they prefer. More times than not, people were choosing Pepsi over Coke which Pepsi went on to happily feature in much of their advertising.

In response to this, the Coca Cola Company launched “New Coke’ ‘in 1985, a drink with a sweeter taste designed to mimic Pepsi’s success in the blind taste tests. Complaints started filing into the Coca Cola company almost immediately, leading to the phase out of “New Coke” in just a few months after its release.

In Malcolm Gladwell’s 2005 book Blink, he broke down the difference in taste and how it plays with people’s taste preferences. In his research, Gladwell found that people tended to prefer Pepsi in a single sip test because naturally people are drawn to sweeter sips. That same preference to sweetness doesn’t hold up when someone drinks a whole bottle or can. This is why many users prefer the smooth taste of Coke when drinking larger quantities. Pepsi, in short, is a drink built to shine in a sip test.

Can’t decide between Pepsi and Coke? Wondering what bringing in Pepsi or Coke for the office would look like? We’re here to help. With Coke and Pepsi vending machines, drink coolers, and micro-markets the options are endless! Contact us today to get started on setting up your ideal breakroom space.